2013 was quite a year. It was both difficult and exciting.

On a business level, MyEcommerce achieved some amazing results, our team has grown and we've launched some great projects in a seriously short space of time. I'm very proud of what the team has achieved.

On a personal level, it was both fun filled and stressful, I guess that is pretty much the norm for an entrepreneur. I've had the opportunity to meet lots of new people and have some seriously insightful conversations. I also feel I've learnt a lot and grown as an individual. I most defintely learnt a lot about my limits and what I can pull off under pressure.

In additonal to everything achieved within MyEcommerce, 2013 also saw the official registration and launch of the Garden Route ICT Incubator, a project Imel, Rudie and I have been working on for quite some time.

Looking back, I know I've been busy and we've made a lot of progress but it feels as if time has flown and it's difficult to quantify what I've done with a year of my life.

Where did the year go?

If you're like me, you're probably wondering what happend to the year, where did it go and what do I have to show for it.

One of the habits I have got into, although it's a difficult one to stick to, is logging my time.

I do this for a few reasons:

To start with, I had a look at the total amount of time I've logged in relation to the total time available in the year. Each year brings us 8,760 hours to utilise or rather 8,765.81 to be scientifically accurate. I based my calculations on the former. We can use the hours we're givien to be productive, sleep, eat or have fun.

I track almost everything I do, but haven't got so far as to start tracking sleep or eating yet.

Anyone who knows me well will know that productivity and fun don't need to be mutually exclusive, or as my mate Tim would put it: "work should be more fun, than fun itself". Bearing this in mind, my first thought would be that I would have logged at least 50% of my time. 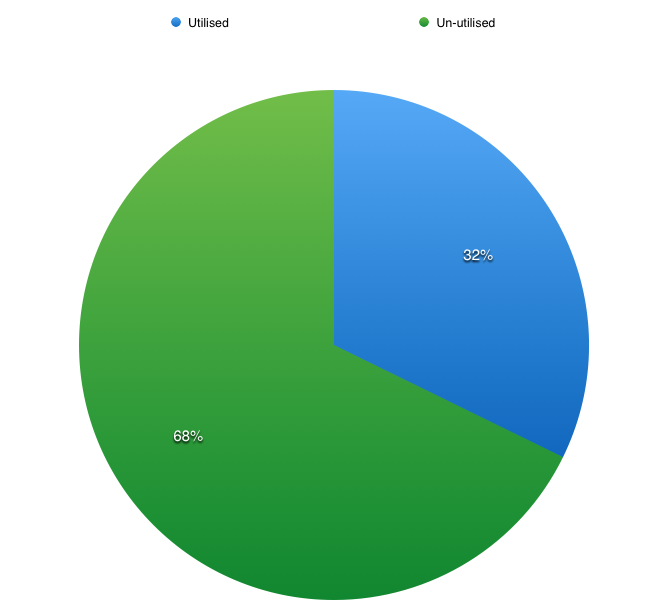 With the number of late nights I worked in 2013, I would never have thought that I was only 'working' 32% of the year.

I put a graph together to visualise how much time I've spent on the various activities that I track. 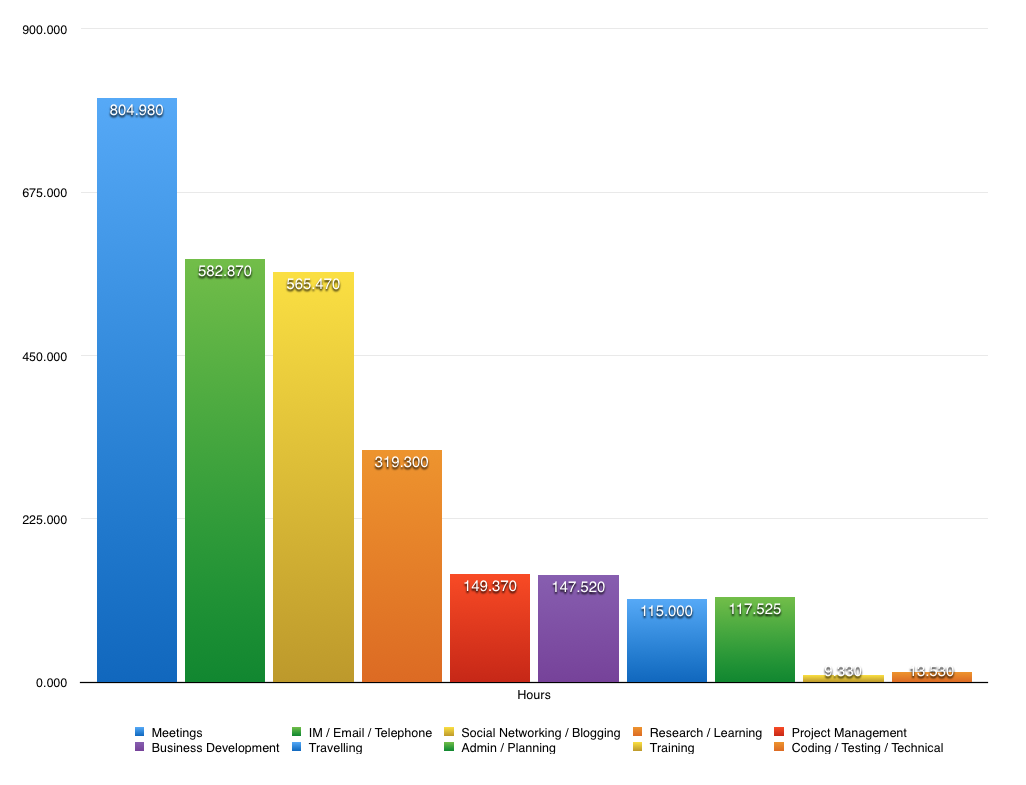 After reviewing this, one thing is clear; I spent a lot of time in meetings, which I should probably try to optimise or monetise.

I also spent a lot of time on various forms of correspondence and communication, which needs to be a bit more objective driven. Generally speaking though, I don't feel overwhelmed by email, and I have got quite a structured system in place. I should just get through individual mails quicker.

I'm not the resolutions type and don't think I can cut back on much specifically as my role is quite fluid.

There are a couple of products I've been planning that I would like to see launched and I'd like to spend more time writing, well actually typing.

Lately I have become a lot more aware of my mortality. I'd like to make as big of a dent in this universe as possible before I depart, so I need to utilise the time I have available to me as best as I can.

I've got a few goals which are linked to me turning 30, so the concept of time and results has never been more real to me.

I'm super excited for the year ahead and looking forward to experiencing each and everyday.

Enter your email
Subscribe
Cheap work is undervalued and seldom appreciated by the client. Cheap clients tend to be excessively demanding and disorganised. They often make you wait for information and input, and require regular follow ups when it comes to payment. In addition to the time and revenue lost while trying to complete
My team was poached several years back by our biggest client at the time. I didn’t have any agreements in place with any of our clients or staff back then so I didn’t have a legal leg to stand on. I knew contracts were important and had them
Since the inception of MyEcommerce we’ve made an effort to keep our accounting and statutory records in order. I started off doing the books myself but as soon as we hired staff, we outsourced our bookkeeping and payroll to a ‘big name’ firm. We ended up dealing with a